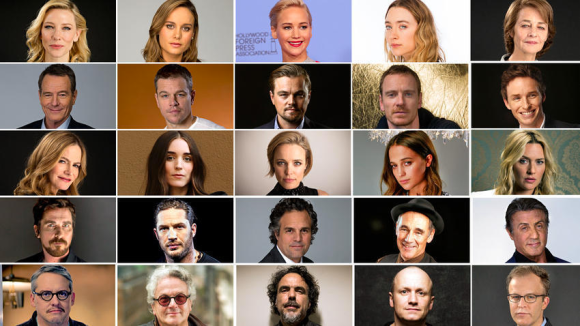 By now there’s been miles of editorial copy published on the #OscarsSoWhite controversy, and by people far more insightful or influential than myself. There’s really no substantive argument I can add to the conversation. But as a liberal progressive affirmative-action feminist tree-hugging left-wing socialist hippie who also happens to love following the Oscars… I do feel a need to explain myself.

Unless you’ve bee living on Planet Nine for a while, you probably know the hashtag #OscarsSoWhite refers to the social media outcry over the lack of diversity in the Oscars as well as the film industry as a whole. Specifically, this is the second straight year without a single person of color among all 20 acting nominations. And the Best Picture nominees, as good as many of them are, are all focused primarily on white stories or casts.

Highly acclaimed movies that focused on the experiences of black people were mostly relegated to the sidelines. Straight Outta Compton did manage a screenplay nomination, But Creed‘s only nomination was for the old white guy (Sylvester Stallone), and Beasts of No Nation was left out entirely. It still seems black stories can only garner Best Picture attention if they’re about slavery (12 Years a Slave) or civil rights (Selma, The Help) or find other ways to keep their black characters subservient to whites (Driving Miss Daisy).

And lest you think it’s just a racial issue, let me assure you it’s sexist as well. No movie about a woman has won Best Picture since Million Dollar Baby 12 years ago, and despite having 2 categories no screenplay written by a woman has won since Juno 8 years ago. And in 88 years of Oscar history only 3 women have ever been nominated for Best Director, only ONE of which won (Kathryn Bigelow).

It’s not as if the movies aren’t there. Five of my Top 10 Films of 2015 focus on female protagonists, including all of my top three. And if you add Brooklyn, Carol, and The Danish Girl to the list, they actually managed a decent handful of nominations, including 3/8 of this year’s Best Picture race. But chances of winning are slim, save for some of the men involved. And Costume Design. ‘Cause we all know that’s a woman’s job.

Of course a big part of the problem, at least as far as the Oscars are concerned, is the membership of the Academy (of Motion Picture Arts and Sciences, or AMPAS – the group who votes on the Oscars), the vast majority of whom are male, white, and surprisingly old. People vote for stories and characters and values they can relate to. Are we really surprised that this group’s choices lack diversity when the group itself is just as monochrome?

Is it still racist or sexist, then? Well yes, of course it is, obviously. But it’s like the old offensive grandpa cliché – you’re not going to change his mind, but you don’t have to listen to him. Which is why the Academy immediately responded (though perhaps not immediately enough) with a new initiative to shake up its membership, drop the dead weight (no pun or ageism intended), and encourage  far more diversity in it recruitment.

Which brings me back, finally, to explaining myself and why I’m still going to watch the Oscars and write about the race:

1. I love movies. It’s the one thing above all others I get all nerdy and annoying about. I love what the medium can do, and I love seeing what talented artists and visionaries do with it.

2. Most movies are shit. I want to see more good movies. I want spend my time and money on the kinds of quality filmmaking that I want to see move of. I want to encourage my friends and readers and everyone else to do the same. Let’s vote with our wallets.

3. Movie awards, like the Oscars, are a celebration of quality filmmaking. [record screeches…] WAIT, don’t walk away! Ok, ok… Am I saying that only good quality movies are nominated for Oscars? Or that all the best ones get trophies? Hell no, that would be stupid. And there’s endless evidence to the contrary. But regardless of what gets snubbed or improperly gilded each year, the point really is to celebrate and encourage filmmakers to take risks and aim higher and make better films.

4. Awards shows are about showcasing to the world what can and hopefully does happen when those filmmakers take risks and aim higher and make better films. Very few people watched the fantastic Winter’s Bone before it got 4 Oscar nominations in 2010, including Best Picture, Screenplay, and a brilliant but mostly unknown actress named Jennifer Lawrence. Since then she has become a straight-up silver screen ingenue, dubbed “J-Law” by the press, been nominated 4 times in 6 years, but perhaps most importantly she has become a positive role model to girls and women (and honestly the boys and everyone else too) by bringing complexity and humanity to one of the most badass film heroines of all time.

And oh yeah, I guarantee that a bunch of the die-hard fans she’s gained since then have gone back to watch her in that little indie triller from 2010. And each one of those viewers is more incentive for studios and investors to spend money to make more movies like Winter’s Bone.

5. The Oscars may not be the best film awards show, but they are by far the most visible and the most influential. The Independent Spirit Awards prove every year to be far more accurate (a subjective view), diverse, and by all accounts – since I never get to actually see them – enjoyable. But that’s the thing: nobody, outside of the industry or punditry, actually watches the other shows. If you’re going to discuss film awards and the merits or statistics thereof, it pretty much has to be framed within the Oscars.

6. And finally, you know what? I just like the Oscars. After all is said and done, it makes me happy when everything else in the news makes me anxious and depressed. Despite all the superficial glitz and glamour and meaningless celeb-stalking, in the face of a world with a shit-ton of more important things to be dealing with, this is my guilty pleasure.

And I do often feel guilty or at least a little silly about it. But I do love it, and I’m going to keep watching. So sue me.