The is part of my continuing project to collect and publish all of my older film lists in one place. Check out the End-of-Year Lists menu at the top of the screen. There you can find links to all the lists I have published so far. I’ll continue adding more as I find them. Stay tuned! 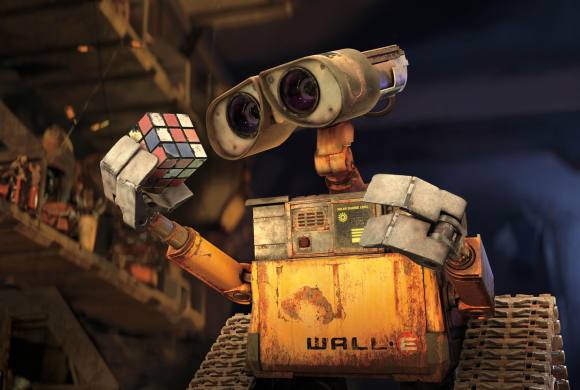 Last year I started out by saying, “2007 was a remarkably good year for film.” I still stand by that. I only mention it to emphasize this: 2008 was not. This is not to say there weren’t any good movies – there were. But the average is lower. Many of my favorites still have inescapable flaws. (Though they’re still worth watching despite them.) Whereas last year I saw 22 films that I felt merited a 5-Star rating, this year there are 5. And only one of them would be at place among last years Top 10.

Due to the sharp difference in quality, I have changed up this year’s format somewhat. Instead of a Top 10 followed by sever other 5-star films, I have created a Top 20 that includes everything with a 4 1/2 rating or higher.

As usual, I stuck to fairly literal definitions of the ratings: 5 Stars = Outstanding, 4 = Excellent, 3 = Good, 2 = Fair, 1 = Poor. Anything with 4 or greater is highly recommended, but even some of the 2’s are worth checking out, despite their flaws.

WALL-E – I said before that one film from this year would be at place among last year’s Top 10. Not only would WALL-E be very near the top of that list, it is perhaps one of the greatest films of this decade. It is certainly the best animated film, and it should rank with 2001 among the greatest space movies of all time. Yes I realize how crazy that sounds, not least because at heart it’s really a romantic comedy (of all things!). It’s also a thrilling adventure, a cautionary tale, a technical marvel, and the most skilled storytelling I’ve seen in a long time. And gutsy: it dares to be a family film with no dialogue for the first 30 minutes, and pulls it off. I don’t want to oversell it, but this is required viewing for… well, everybody.

The Visitor – Lonely widower Richard Jenkins (in an Oscar nominated role) on a business trip returns to the New York apartment he hasn’t set foot in for years, only to discover an illegal immigrant couple who have been scammed into renting it. They become friends and live and learn from each other in a plot that in other hands would be predictable and boring. The hands behind this one however, are those of Thomas McCarthy, the skillful writer/director behind 2003’s The Station Agent. In those hands The Visitor becomes a vibrant, life-affirming masterwork. That is, until the horrific 2nd half involving near Brazil-like government bureaucracy. I can’t say more without giving away too much. Suffice it to say there’s a reason this film holds my #2 spot.

(The Dark Knight, Frost/Nixon, and Slumdog Millionaire are tied for third and listed in alphabetical order. I just couldn’t figure out how to rank one higher than either of the other two.)

The Dark Knight – This is no fantasy adventure comic book story about a superhero. Instead Christopher Nolan has created genre-bending crime drama that serves as a treatise on modern society’s glorification of chaos, crime and vigilantism. From the earliest westerns, we have always thrilled to see the black-hats ransack the village so that we can cheer when the white-hat rides in and saves the day. But now the white-hat (a.k.a. The Dark Knight) has been transplanted into a world where there are no easy answers even for a gunslinger-with-a-heart-of-gold. Our world. Or near enough that we can easily imagine it’s ours. Forget about Heath Ledger’s amazing Loki-esque God-of-Chaos turn as the Joker. Forget about the guy in the cape. This is an ensemble piece acted and directed with precision. It is also a modern fable destined to be a classic of cinema history.

Frost/Nixon – The movie adaptation of the stage play recreating the 1977 interviews between David Frost and Richard Nixon. This is a career best for probably everyone involved in this film, including diector Ron Howard who’s potential behind the camera of his good-not-great films Apollo 13 and A Beautiful Mind is finally realized. It seems he has finally learned the importance of subtlety. For the most part it appears that he has decided to sit back and let the actors do all the work (and incredible work they do!), but the whole story comes together with a technical precision that could only be attributed first-rate director. I’m young enough that I never knew about these interviews before. Now that I see the movie, it plays not like a history lesson, but rather a poignant allegory for the Bush years: “I’m saying when the President does it, that means it’s NOT illegal!”

Slumdog Millionaire – This is actually a deceptively simple love story that has probably been told hundreds of times in as many different ways. In the hands of the brilliant Danny Boyle (Trainspotting, 28 Days Later), however, it becomes a vibrant thrilling work of art that feels as fresh and original as anything. Jamal goes on India’s “Who Wants to Be a Millionaire?” Miraculously question relates to a part of his life growing up in the slums of Mumbai. The majority of the film is told in flashbacks to that childhood, where he meets and eventually falls in love with Latika but always loses her at the last minute. The story’s reliance on the theme of destiny threatened to be a turn-off, but the beauty and energy with which it’s told (strangely reminding me of the great Amelie) made me fall in love with it.